[1] Weissenborn instrumental
[2] With Laura from audience
[3] On piano 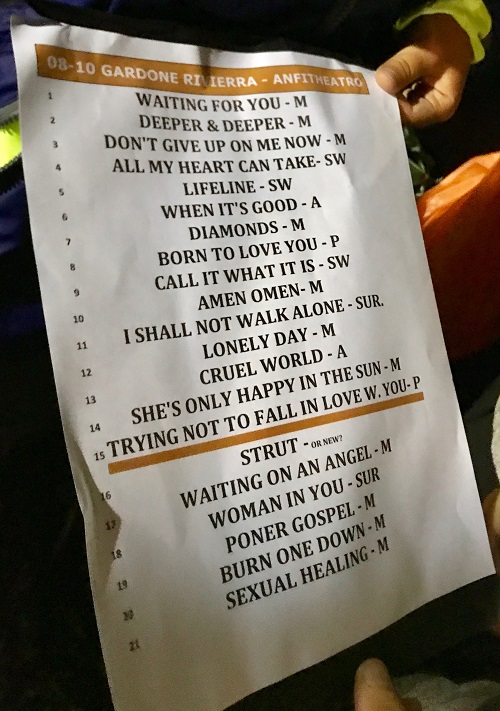 If you’re gonna finish,
You got to begin.
Don’t you fear,
What you don’t know.
Just let that be,
Your room to grow

what EMI has done in Europe is print my CD with an embossed label on the cover. Now, a CD cover is only five inches by five inches, right? Well, they’ve embossed an inch-and-a-half insignia saying, “THIS CD IS COPY-PROTECTED.” Without me knowing and without checking with me!

a great concert indeed, let me say it was my first time seeing Ben playing live so things written are from a beginner point of view , hope you’ll understand. My interest in his music is relatively recent (in october 2000 i just heard “Fight for your mind” and my enthousiasm sparked. Nevertheless even after listening to Live from Mars i was not totally impressed by his live performance so better to go and see with my eyes (and ears) The Idroscalo in Milan was quite packed , hot and humid and full of mosquitos but this ain’t nothing

Ben arrived a little late after 10 PM so people was getting impatient after the delay, he wore blue jeans and blue Lacoste polo for the one interested.show opened with Oppression and it was quite low profile but it happens with at beginning of the show but the percussion solo was great, yet more and more Ben and his buddies kept growing and on fight for your mind Juan played an incredible bass solo, as if he were in trance, truly powerful, Ben added spice with electrical and noise earthquakes from his Weissenborn on alone and voodo child and the whole band never stop rocking , i mean the whole show lasted nearly two hours and a half with 20 songs and two encores, even the acoustic part, the frist encore was intense and well appreciated. a great

show from a great man (and band), truly.
here we go with the setlist:

get up stand up

fight for your mind

the woman in you

waiting on an angel

widow of a living man

i shall not walk alone

welcome to the cruel world